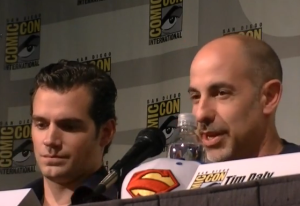 In a new interview by the Associated Press, Man of Steel writer David Goyer said that production on the film's sequel, in which Superman will take on Batman, is moving along nicely--seeming to put aside the timeline concerns and the "they're rushing it!" cries that some fans have been expressing--and he also said that, in general, he can't allow himself to get too hung up on what fans would want him to write. "One of the things that has been fun for us, is we're a bit a further along than what I think people realize," Goyer said in a video interview taken during the BAFTAs. "I think from a fan point of view, you're conscious of that when you're working on these things, but you can't let yourself be paralyzed by that. At the end of the day, you still have to create something. And if you try and think about, 'Well what would the fans like?' or 'What would the audience like?' then you stop being creative and it's sort of like where does it end? You have to write the story that you want to write, and hope that people want to see it." Goyer seems to be the franchise's dedicated lightning rod, saying unpopular things that take the heat off of the actors and director Zack Snyder; he also recently said that he doesn't believe Superman's conviction against killing is inherent to the character. "I've written comic books as well and this is where I disagree with some of my fellow comic book writers," Goyer said. "'Superman doesn't kill'. It's a rule that exists outside of the narrative and I just don't believe in rules like that. I believe when you're writing film or television, you can't rely on a crutch or rule that exists outside of the narrative of the film. So the situation was, Zod says 'I'm not going to stop until you kill me or I kill you.' The reality is no prison on the planet could hold him and in our film Superman can't fly to the moon, and we didn't want to come up with that crutch." Batman vs. Superman stars Henry Cavill and Ben Affleck and will be in theaters in July 2015.

Batman vs. Superman is Farther Along Than People Realize, Can't Worry About Fans