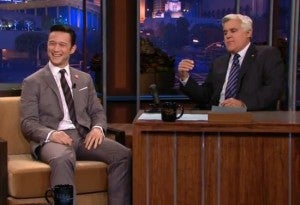 In the Dark Knight Rises, it was revealed that the first name of Joseph Gordon-Levitt's character John Blake was actually Robin. Many fans had speculated that Gordon-Levitt was being set up to be the next Batman. Of course, with Warner Bros. announcing Ben Affleck as the next Batman, it's pretty much killed any notion that Gordon-Levitt would be taking over the cape and cowl. But what about the Robin role? Could Joseph Gordon-Levitt actually pop up in Batman Vs. Superman as The Boy Wonder? When Joseph Gordon-Levitt appeared on the Tonight Show last night to promote his new movie Don Juan, Jay Leno asked him if there was any chance that he might be Robin in Batman Vs. Superman. And surprisingly, Joseph Gordon-Levitt didn't completely deny the possibility even though he did suggest it was extremely unlikely. Gordon-Levitt said, "I don't know. I don't think so. I don't have anything to do with that movie. I was in a movie that was the end of a trilogy. I was super proud and fortunate to be in. And I think that these next movies are…they are sort of a separate chapter." In regards of the casting of Ben Affleck as Batman, Gordon-Levitt once again offered up his endorsement. Gordon-Levitt said, "I think he's going to be great."