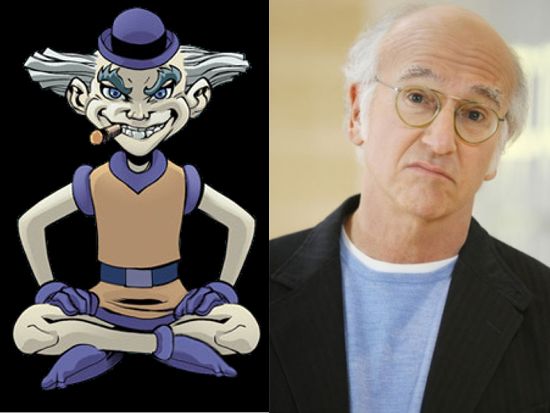 Chalk this one up as one of the most outrageous rumors out there about the upcoming Batman Vs. Superman movie. According to a report on Radar Online, Larry David could be in the running to play Superman villain Mr. Mxyzptlk. According to one of the site's insiders, Ben Affleck is actually pushing for his pal and neighbor Larry David to make an appearance in the Batman Vs. Superman movie. The unnamed insider is quoted as saying, "The pair chatted about the idea with earnest abandon throughout the course of Emmy weekend. Larry has long been courted by the big budget superhero industrial complex, being linked to roles in the Sam Raimi Spider-Man sequels nearly a decade ago." The unnamed insider added, "But Ben is somebody he trusts and enjoys spending time with and this could be the right situation for Larry to finally appear in a huge-grossing hit film. Fun speculation that it could be for the famed Superman enemy role of Mr. Myxlplyx (sic) could make this piece more exciting, since Larry is a dead ringer for the character." Yes, Mr. Mxyzptlk is actually misspelled in the original report, but it is one of Superman's more challenging villain names. According to Radar Online, the mysterious insider thinks that Affleck will get his way and David will be in the movie. He also thinks Affleck will get a producer credit on the movie. Larry David was the head writer and executive producer of Seinfeld, and he created the HBO series Curb Your Enthusiasm. So how much credibility should this report be given? Well, if they were ever going to put Mr. Mxyzptlk in a Superman movie, we think Larry David would be a fine choice. But the idea of Mr. Mxyzptlk in a Superman movie at this point is kind of crazy within itself. If Affleck and David were actually having this discussion, then we would lean to think that they were making a big joke, and someone took it seriously.