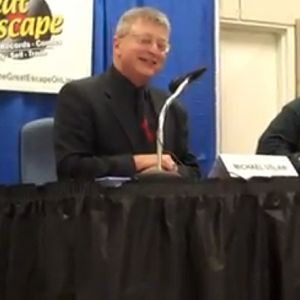 producer Michael Uslan told an interviewer that after spending years trying to shake the stigma of the campy, comical Batman '66 TV series, even he was skeptical of Tim Burton's decision to cast Michael Keaton as Batman--and that the way he was proven wrong is a key to why he's not worried about Ben Affleck taking over the part. "All this work that I've put in all these years to make a dark and serious Batman--[Tim Burton is] going to hire a comedian!" Uslan admitted was his response. "I could see the posters: 'Mr. Mom is Batman!' Oh, no. But then he explained his vision--he had a vision, and he was right. This is all about Bruce Wayne--it's not about Batman, it's all about Bruce Wayne. If you're trying to do a serious, dark superhero, people have to believe Bruce Wayne as this obsessed, driven guy almost to the point of being psychotic--a guy who would get dressed up like a bat and do what he did. So we went through the hoopla with Michael Keaton--the fans were the same reaction that I had originally except that I had the benefit of hearing a vision right away. And then when they went to actually see the movie, they never wanted anyone else to play Batman--never. A number of years go by and the torches and the pitchforks go up. 'Oh, my God, that guy who played the gay cowboy is going to be the Joker--they're going to destroy the greatest villain in history.' And when they actually saw Heath Ledger's performance, nobody ever wanted The Joker played by another actor again--so here we are." You can see the full interview, with more on the movie, Affleck and fan reactions, below.

Batman vs. Superman Producer Michael Uslan on Affleck Backlash: I've Been Through This All Before