Victor Stone, better known as the longtime Teen Titan and (thanks to reinvented continuity) now founding Justice League member Cyborg, will appear in Batman vs. Superman, played by Ray Fisher. According to Variety, Cyborg is "not a major part in the Batman-Superman feature [but] is a member of the Justice League, and the role will become much more significant role as Warner and DC develop more films related to the Justice League universe." Fisher, a relative newcomer to film, is more known for his theater roles including the Broadway play Fetch Clay, Make Man, in which he portrayed Muhammad Ali, says the Variety story. They also report that he was also one of the actors testing for Star Wars Episode VII. 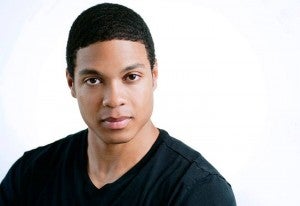 Cyborg has become a key part of the Justice League mythology in the New 52, DC's official continuity following a line-wide reboot about three years ago. During the first arc of Justice League, which kicked off the new continuity, Stone was the point-of-view character in many ways, making his transformation from a high school kid to a super-powered cyborg on panel while the other founding members of the team -- including Superman, Batman and Wonder Woman, who will all appear in the film as well -- were already superheroes with at least some history by then. "I think he would create an incredible bridge between superheroes and humanity," Batman vs. Superman star Henry Cavill said of the character in Man of Steel DVD extras. The remaining Justice League founders who have not yet been announced as appearing in the film are Green Lantern, The Flash and Aquaman. While Green Lantern was a box office bomb a few years ago, there has been some talk of the property re-emerging as part of the Warner Bros. Justice League. The Flash is currently in the pilot stage at The CW and is expected to be picked up to series for Fall 2014. Aquaman is being developed as a feature film property, although at what stage in development is unknown. Each of the three have been rumored to appear in Batman vs. Superman at one point or another. Warner Bros. have not yet responded to the Variety story with an official announcement or denial, but Variety is one of a handful of entertainment industry sources that can typically be trusted to break this kind of story. Previous adaptations to the character in other media have seen Stone portrayed by Fantastic Four star Michael B. Jordan (in Justice League: The Flashpoint Paradox), Shemar Moore in Justice League War and the late Lee Thompson Young on Smallville.