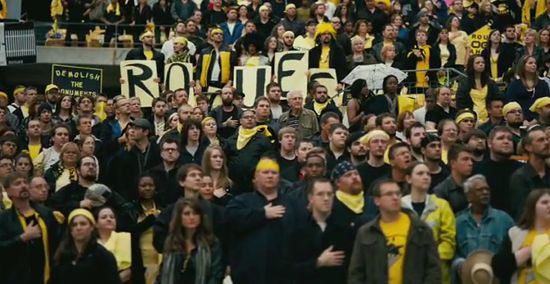 Back in September, there was a report that Warner Bros. was already looking for extras to shoot crowd scenes for Batman Vs. Superman in Los Angeles in October. Many were skeptical of the report, because they felt it was too early for the film to start shooting. Now, another report has surfaced, which also seems to indicate that Batman Vs. Superman will be filming a crowd scene in October. According to the East Los Angeles College Campus News, Warner Bros. will be filming a scene at East Los Angeles College Weingart stadium during halftime of the Husky football game on October 19, 2013. The date matches up exactly with the earlier report of when Warner Bros. was looking for extras for a Batman Vs. Superman crowd scene. The football game between East Los Angeles College and Victor Valley College is scheduled to kickoff at 6:30 PM with the stadium reportedly being transformed into Gotham City University home stadium at half time. The Batman Vs. Superman football game is said to be between Gotham City University and rival Metropolis State University. As an incentive for the extras, the first 2,000 people who sit in the filming area of the stadium will reportedly receive T-shirts designed by director Zack Snyder. There will also be prizes raffled off throughout the night. The crowd will be asked to wear the Gotham City colors of black and gold. The entire length of the shoot will be about 20 minutes, consisting of three takes during halftime. Of course, one of the most memorable scenes of The Dark Knight Rises also took place in a football stadium, so it's interesting that Warner Bros. is once again going that route. Batman Vs. Superman is scheduled to be released in movie theaters on July 17, 2015.