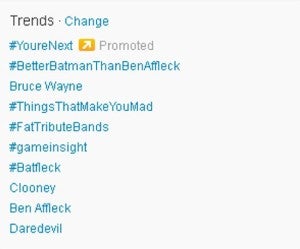 How much commotion has Warner Bros. created by announcing Ben Affleck as the new Batman? The answer is a lot. The news has dominated the trending topics on Twitter since being announced earlier today. In fact, Twitter users have coined the term Batfleck to describe the casting. There are several trending topics directly tied to the announcement, including Bruce Wayne, #Batfleck, #BetterBatmanThanBenAffleck, Ben Affleck, and Man Of Steel. The news is even causing former Batman actors to trend, as both Michael Keaton and Clooney have made an appearance on Twitter trends. Even Matt Damon has trended, likely due to all the Matt Damon as Robin jokes being made. And while he's a Marvel Comics superhero, Daredevil 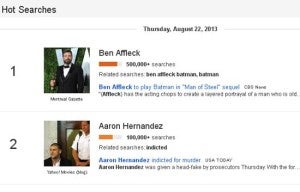 has trended as well, due to Affleck playing Daredevil in the past. On Google, it appears to be a similar story as Ben Affleck has shot up to the top of Google Trends. In fact, Ben Affleck is beating the second most searched term by a five to one margin.