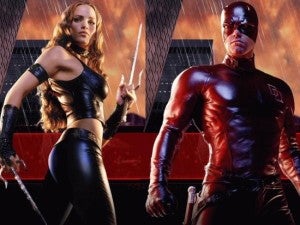 While Matt Damon might be facing Robin questions because he is Ben Affleck's pal, he's not the only Hollywood star that is facing Batman-related questions because of a relationship with Ben Affleck. Jennifer Garner is at the Toronto Film Festival to promote Dallas Buyers Club, and she's facing the inevitable questions about her husband Ben Affleck's big new role. Surprisingly, no one appears to have asked her yet if Ben Affleck landing the Batman role means she's going to be Catwoman, but we're sure that she will get the question eventually.  In an interview with MTV, Garner said, "You know, I was excited for him. I was excited because he had a real take on what he wanted to do, and you know, I have to say, my husband is a pretty great storyteller himself, and I'm excited to watch him do it." Garner's comments seem to echo some earlier claims by director Kevin Smith, who is a good friend of Affleck's. Smith made the point that Affleck is very strategic-minded and always plans ahead. When pointing out a scene where he didn't like Batman's response to Bane in The Dark Knight Rise, Smith said, "With the Batfleck that will never happen, he will always have something to say in that moment, where you will be like, 'That's smooth. That's Affleck.'" In regards to if she's heard Affleck's Batman voice yet, Garner replied, "I hear every voice." Unfortunately, she didn't share the voice.