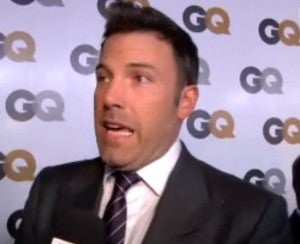 With news breaking today that J.J. Abrams reportedly beat out Ben Affleck for the Star Wars Episode 7 directing job, we wondered what Ben Affleck must be thinking. Except we didn't have to wonder, because we remembered that Ben Affleck had already weighed in on what he thought about J.J. Abrams directing Star Wars. In an MTV News interview back in November, Ben Affleck said, "J.J. would kill it. I mean J.J. would crush it. J.J. is spectacular, but he would be great at anything." Interestingly enough, Ben Affleck also weighed in on what he thought of himself directing Star Wars Episode 7. Ben Affleck said, "I'm glad I don't have that job. It's a tough thing, it's a tough decision to make. Now, that's the one where whoever it is, I guarantee you by the time the movie gets made I'm going to be that dad calling in favors, where it's like 'Hey, it's Ben, can me and my kid come to the premiere, swing by, by any chance?'" Hopefully, J.J. Abrams will see the ringing endorsement that Ben Affleck gave him for the job and hook Ben and his kid up with premiere tickets.

Ben Affleck On Star Wars: J.J. Would Kill It