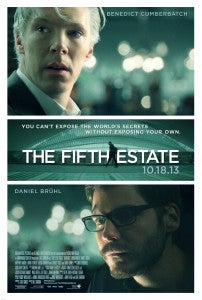 While more or less everybody is disappointed by the paltry $1.7 million estimated weekend box office take of The Fifth Estate, Benedict Cumberbatch couldn't have been crying too loud. That's because while the Wikileaks drama--this year's worst opening for a movie in more than 1,500 theaters, according to Entertainment Weekly, made less than twice what his indie drama 12 Years a Slave did...on 19 screens. Opening on over 1,700 screens, The Fifth Estate--in which Cumerbatch plays Wikileaks founder Julian Assange--averaged only $969 per venue. At $960,000, 12 Years a Slave took in a terrific $50,526 per theater average, and solidified buzz that the film would be an Oscar favorite. For Cumberbatch, who's one of the hottest names in Hollywood right now (coming off a stint as the villain in Star Trek Into Darkness, he's been rumored for Marvel and DC movies, as well as Star Wars Episode VII, among other things), having the indie smash hit right now is beautifully timed; it's a bit like if Ben Affleck had opened Gigli the same weekend Hollywoodland hit, offsetting the bigger-but-worse movie.

Benedict Cumberbatch Had The Weekend's Best and Worst Theatrical Openings