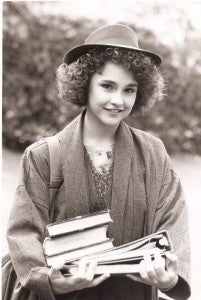 Diane Franklin, who starred in a string of hits in the 1980s and early '90s including Bill and Ted's Excellent Adventure, Better Off Dead and Last American Virgin, will appear at New York Comic-Con next month to meet with fans and sign her new book, Diane Franklin:The Excellent Adventures of the Last American, French-Exchange Babe of the 80s. The convention hasn't yet made the announcement, but Franklin shared it with her fans on Facebook earlier today. She said:

"SURPRISE NEWS UPDATE!!! I am going to be a guest at COMICON in N.Y. on FRIDAY, October 12, from 4:15-5:15!! and on SATURDAY, October 13th from 10:45-11:45!! YAY!! And yes, the times are strangely specific because I'm coming in late and they want to fit me in!! But I am VERY proud and excited to be part of NY Comicon! It's going to be a blast! I will be selling autographs, taking fan photos, signing books and selling both my collectors book (only a few left), and my published book! So, if you want to see me in person really soon, this is your opportunity! The convention is at the Javits Center on 11th st. between 34th and 40th. Also, you FB fans are the first to know! Comicon NY will be posting an announcement soon, but in the meantime I am giving you all a heads up to think about it:) Hope to see you there!!! With Lots of Love! Diane"

This will be a great opportunity for fans to get their hands on the custom-printed book, which is not available digitally and currently only appears to be available through Amazon. We've got a copy in-hand, though, and will be interviewing Ms. Franklin soon. It's been a busy few months--maybe she can loan us a phone booth to get us back to when the book was newly-released?