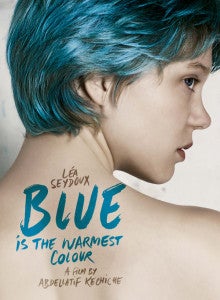 won the prestigious Palme D'Or at the Cannes Film Festival today, marking only the second time in nearly fifty years that a French film has managed to do so. The film, based on the French graphic novel Le Bleu est une Couleur Chaude ("blue is a warm colour"), by Julie Maroh, is a three-hour, visually explicit lesbian love story  that some critics expect will need to undergo some changes in order to get distribution in the U.S. "For me the film is a great love story, and the fact that it is a great love story that made all of us feel that we were privileged, not embarrassed, to be flies on the wall invited to see this story of deep love and deep heartbreak evolve from the beginning," Cannes jury president Steven Spielberg said. "We were absolutely spellbound by the brilliance of the performances of those two amazing young actresses and all the cast, and especially the way the director observed his players. We just all thought it was a profound love story."

Blue Is The Warmest Color Wins Palme D'Or at Cannes