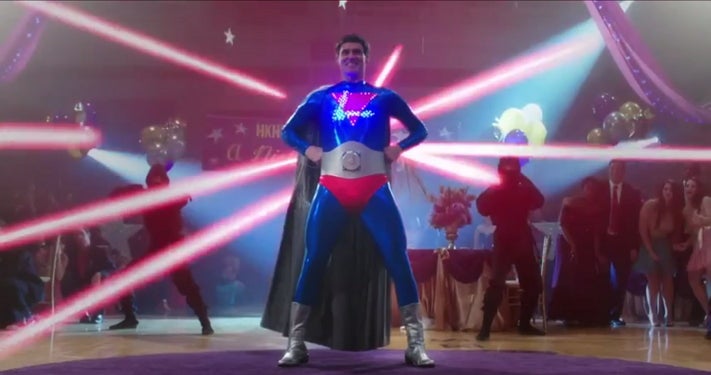 U.S. moviegoers got Dumber this weekend.

The Farrelly Brothers' Dumb and Dumber To, a sequel twenty years and one blissfully-forgotten prequel in the making, scored the top spot at the domestic box office this weekend, generating a little over $38 million, according to studio estimates.

That's a little less than expected, but a great performance considering that the movie cost only about $40 million to make, and that both star Jim Carrey and the Farrelly Brothers have had a difficult time connecting with audiences in recent years.

It's been more than ten years -- since 2001's Shallow Hal -- since the Farrellys had a movie open north of $20 million -- and their biggest-ever opening was less than $25 million prior to this. The original Dumb and Dumber opened to just $17 million before going on to generate $125 million in theaters.

In fact, a performance anywhere north of "embarrassing" will bring Dumb and Dumber To into the Farrelly's top five highest-grossing movies ever by this time next weeek. While they had blockbuster success with There's Something About Mary ($175 million) and Dumb and Dumber, they've never made another movie that cracked the $100 million mark and only two -- Me, Myself and Irene with $90 million and Shallow Hal with $70 million -- made more than $50 million.

It's also been more than a decade since Carrey had a live-action opening this big (the last time was Bruce Almighty in 2003, which made almost $68 million, although he's had comparable success with Horton Hears a Who in the meantime). The perception remains that he's one of Hollywood's most bankable stars, but the reality appears to be that he's a longer-term investment; Carrey-starring movies don't lose money, but rarely make a big splash in the first week anymore.

The numbers may change, of course, but what's arguably even more interesting is that Dumb and Dumber To eked out a win over an overperforming Big Hero 6. While Dumber was expected to top $40 and conventional wisdom had both Big Hero 6 and Interstellar in the $30-$35 million range, what instead happened was that Dumb and Dumber To made just over $38 million and Interstellar $29 million, while Big Hero 6 made more than $36 million, narrowing the expected gap significantly.

Its numbers also represent roughly a 35% week-to-week drop (compared to closer to 39% for Interstellar, or the 50%-plus that is standard for Hollywood blockbusters during the summer). That's an impressive number (as is Interstellar's) and suggests that both films could continue to perform in spite of the introduction of things like The Hunger Games: Mockingjay and The Hobbit: Battle of the Five Armies next week and beyond.

Interstellar underperformed but only by the tiniest bit; it's made $111 million domestically now, and will likely make its money back, although it's nowhere near the kind of blockbuster sensation that Inception was (that movie had made $142 million by this point). It's currently situated as the fifth-highest-grossing Nolan film in the U.S., which is likely where it will stay. it's difficult to imagine the movie generating the additional $100 million it would need to surpass Batman Begins at a time when there are a barrage of new movies coming to distract audiences and take up screens. If it continues to be a favorite with critics, though, it's possible it could have a long enough residency in theaters to manage the trick.

Box Office: Dumb And Dumber To Tops Big Hero 6 And Interstellar For The Weekend