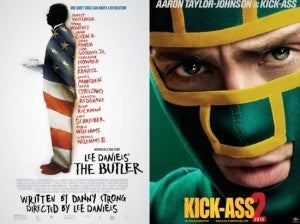 It proved to be an interesting weekend at the box office. The biggest winner was The Butler, which took in an estimated $25 million. However, The Butler even came in short of the $30 million that experts were estimating on Friday. After The Butler, We're The Millers managed to nab second place with $17.7 million. It's actually a strong second weekend for a film which has not been well received by critics. While at one point Kick-Ass 2 was predicted to win the weekend, it fell all the way to third with only $13.6 million. While some are already labeling the film a disappointment and a failure, it's important to remember Kick-Ass 2 only had a $28 million budget. With a good international showing and DVD/Blu-ray sales, the film actually has a better shot at being profitable than many bigger budget blockbusters that had stronger opening weekends. Also, being labeled as failures are new releases Jobs and Paranoia. Jobs took in $6.7 million, but it can also find solace in the fact it was shot on a low budget of only $12 million. Paranoia might prove to be the true biggest failure of the weekend, as the film took in $3.5 million with a production budget of $35 million. Update: The latest numbers indicate that Kick-Ass 2 has fallen to fourth place. Elysium is estimated at $13.6 million, while Kick-Ass 2 is estimated at $13.568 million. Of course, with numbers this close, things could change again when the official results hit on Monday.