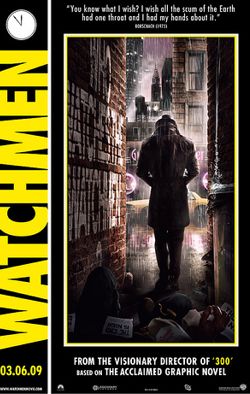 Zack Snyder's Watchmen movie took another huge nosedive this past weekend falling to 5th place. After cashing in with a whopping $55.7 million in opening weekend ticket sales two weeks ago, Watchmen brought in only $6.7 million in its third weekend at the box office.

According to the Los Angeles Times, Box office expert Paul Dergarabedian believes Watchmen's box office woes are due to the film's R-rating and unfair comparisons to more traditional comic book franchises such as Batman or Spider-man. Dergarabedian, who is president of Media By Numbers, a company that provides analysis and commentary based on box office sales and data, also believes that viewers aren't flocking to Watchmen because all of the superheroes in the film are unfamiliar to the general public. He went on to say that "this is not a populist comic book movie."

The weekend's top grossing film was the Nicholas Cage apocalyptic thriller, Knowing. The film, about an ancient numerical code that may predict the end of the world, took in an estimated $24.8 million dollars in ticket sales.

The film that knocked Watchmen out of the top spot at the box office last weekend continued to dominate the superhero picture. Race to Witch Mountain took the 4th place spot in theatres raking in $13 million.