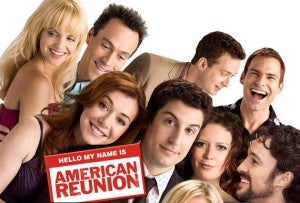 Following an unbelievable opening weekend and a strong second weekend that saw box office returns fully twice that of the first-week releases that were challenging it, The Hunger Games enters into this weekend as the #1 film at the U.S. box office and faces only one real challenger: American Reunion, the fourth theatrical release in the American Pie franchise and the first in the eight years since Jason Biggs and Alyson Hannigan tied the knot in American Wedding. After a series of direct-to-video sequels that starred only one or two of the original stars and yielded diminishing returns, American Reunion will see the entire cast of the first two films returning to the American Pie franchise, including some who weren't in the 2003 wedding installment. It's the only major release hitting theaters this weekend, leading some to wonder whether The Hunger Games--even in its third week--might retain the #1 spot against soft competition. It seems unlikely, though--even if American Reunion is a disappointment on the order of last year's Scream 4, which seems somewhat unlikely given the aggressive promotional campaign by Universal, that movie opened with about $38 million in mid-April, which seems roughly comparable to what American Reunion might expect in a similar calendar spot. The Hunger Games also lost a little under 60% of its gross week-to-week, not far off from the first Twilight film, which lost about 65% from its first weekend to its second. In Twilight's next frame, it lost another 48% which--if The Hunger Games were to perform similarly--would drop its weekend haul to right around $32 million. Twilight has been used as a rough barometer for The Hunger Games expectations all along given their similar target demographic, and while The Hunger Games has exceeded every one of those expectations, it would have to bend the normal rules of box office performance and lose a smaller percentage of its audience from week 2 to 3 than from 1 to 2 in order to make $40 million and be comfortable against American Reunion. All of that said, it's hard to guess what American Reunion will make and while somewhere between $35 million and $40 million wouldn't be an unreasonable guess for The Hunger Games this week, similar hyped ensemble comedies have been hard to pin down in recent years. American Wedding made $33 million in its opening weekend back in 2003, which means that in today's box office dollars it would almost certainly top $40 million. And The Hangover Part II managed an astounding $86 million when it opened last May, which would have taken the top spot last weekend. Bridesmaids, though, which is widely considered a huge success, only made $26 million in its opening weekend en route to delighting fans, making more than $150 million dollars (for those keeping score at home, that's five times its production budget) and even nabbing an Oscar nomination. Of course, if it takes #1 at the box office and unseats the seemingly-unstoppable Hunger Games, the next question becomes whether yet another American Pie movie can be far behind. After all, only Hannigan (who stars in How I Met Your Mother on CBS along with Avengers star Cobie Smulders) seems to have steady work that might prevent her from coming back.

Can Hunger Games Hold Out Against American Reunion?