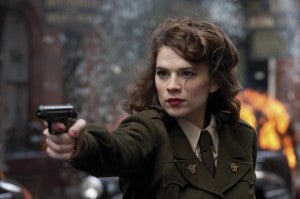 It's the end of the road for Hayley Atwell in the Marvel Universe after the actress confirmed that she won't be returning for a second Captain America movie later this year. It's probably no great surprise that Peggy Carter, the love interest from Captain America: The First Avenger, won't return as an octogenarian to steal our hero's heart again. Still, the last time we heard, Atwell seemed to be implying there was still a chance, telling news outlets back in September that she couldn't tell them anything because Marvel hadn't yet released the information and they're protective of such things. This led almost everyone to believe that Peggy Carter would appear in the film in one way or another, and that Atwell had been told not to speak so as not to ruing the surprise. Talking with Time Out London last week, though, she reportedly revealed that's not the case. Peggy Carter is, however, still alive and well at last tally in the Marvel Cinematic Universe; her file in a deleted scene from The Avengers says so. Don't count the character out, then, for possible cameos in future films. She's meant to be retired in the U.K. now, but many fans have speculated that's just begging for the character to become involved with MI6 if the "spy thriller" angle on Captain America: The Winter Soldier pans out and future sequels follow in that mold. Whether Atwell would return in that case is anyone's guess, but most of the actors playing major roles in the first generation of Marvel movies were signed to multi-picture deals to keep continuity from film to film. Of course, ask Josh Dallas and Terrence Howard whether Marvel is averse to replacing actors in mid-stream when necessary. Atwell, meanwhile, is headed to work on the second series of The Black Mirror, a "satirical drama" which boasts as an alumnus Downton Abbey's Jessica Brown Findlay--who's reportedly a frontrunner to play Peggy's niece and Captain America's new love interest, Sharon Carter, in the upcoming sequel.