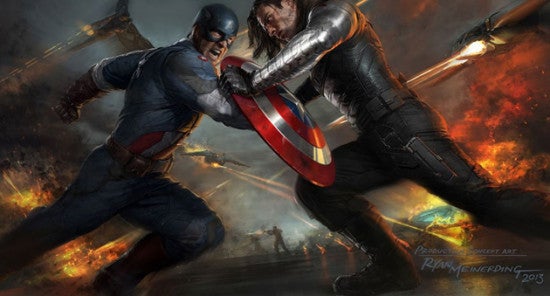 will release one of the first reports from the set of Captain America: The Winter Soldier in its new issue out next week. Celebrating the 25th anniversary of the entertainment magazine, they're launching into a bunch of "top 25"-style lists and articles, beginning with 25 must-see movies of 2014. Besides Cap 2, fans will be able to read up on The Hobbit: There and Back Again, X-Men: Days of Future Past and Godzilla, among many others. The film, which will be in theaters on March 28, is widely expected to double the fairly modest (by Marvel standards) theatrical take of Captain America: The First Avenger. They also hope a tie-in with Marvel's Agents of S.H.I.E.L.D. will give both properties a bump. 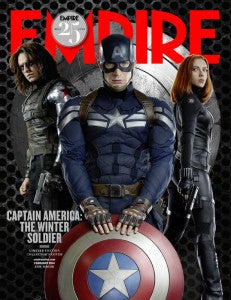 From Empire: As you can tell from this cover, the new adventures of the First Avenger will be a bit darker and more morally confused than its Stars-and-Stripes waving predecessor. This time, Steve Rogers (Chris Evans), aka Cap, discovers something rotten in the state of SHIELD, and also has to deal with the reappearance of his old friend Bucky (Sebastian Stan), now brainwashed and cybernetically modified and transformed into the titular Winter Soldier. In fairness, darker and more morally confused is more or less the way you go when you're transitioning from a World War II film, where the villains are pretty clear, to a '70s-style espionage movie, which is the style they're aping in Captain America: The Winter Soldier. Bringing in Robert Redford to head S.H.I.E.L.D. is likely as much a symbolic move as anything else, as it immediately reverberates with the twisted morals of the Watergate scandal and the unprecedented journalistic sleuthing that brought down the Nixon White House, as dramatized in Redford's All the President's Men.