Yes, folks--that was indeed Captain America's new costume for the forthcoming sequel Captain America: The Winter Soldier. Or at least a costume he wears in the movie. Whether it turns out to be the final or only one of course remains to be seen. In any event, the S.H.I.E.L.D.-friendly suit seen in concept art earlier this month has turned up in this first batch of set photos from JFX Online. The site doesn't say where the photos were taken, other than the fact that Chris Evans (Captain America) and Scarlett Johansson (Black Widow) were filming on location in Los Angeles at the time. From the look of the lighting and setting, a sensible guess might be that the two of them are on a covert mission for S.H.I.E.L.D. at this point in the film, but that's really all it would be -- a guess. 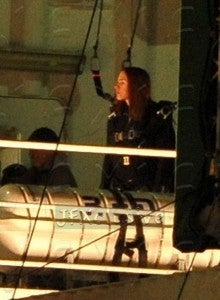 The costume seen here appears to be a variation on the Steve Rogers: Super Soldier costume that Captain America wore a few years back--ironically when Bucky Barnes (also known as The Winter Soldier, this film's villain) was Captain America for a time.