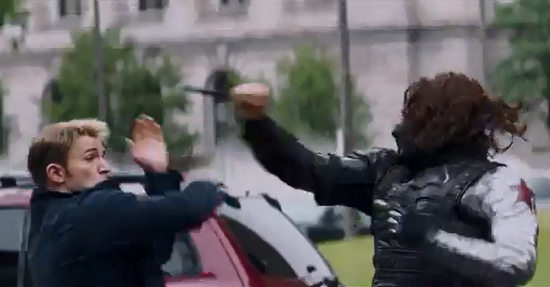 In just over two and a half minutes, today's initial trailer for the forthcoming Marvel sequel Captain America: The Winter Soldier gave us an awful lot to think about. It seemed to communicate not just some of the events of the film, but its themes and big-picture messages in a way that few movie trailers manage. It's a movie steeped in betrayal and paranoia, in morality, mortality and the fragility of human relationships, which can come apart at any time for any number of reasons. And it's a movie that's got a lot of big-ass explosions. Lest you be too worried that you might learn something. Here are the biggest things we took away from Captain America: The Winter Soldier's first trailer. More thoughts on this later, certainly...

Crossbones, Agent of S.H.I.E.L.D. Frank Grillo's Crossbones is working with Cap at some point, as we see him cracking wise after Steve Rogers dives out of the back of a S.H.I.E.L.D. jet. It's been mentioned before that Crossbones was a S.H.I.E.L.D. Agent, but the fact that he's currently a S.H.I.E.L.D. agent, not an old one who went rogue or a spy who's been burned, is probably notable--especially as you read on and realize that so much of this film seems to be a bit of a paranoid thriller about how Captain Americacan rely on, who he can trust, and the cost of betrayal in a world that's much more morally-gray than he remembers. That the guy he literally trusted to fly him into parts unknown and watch him jump out of the plane unaided, turns out to be one of the bad guys? That's gotta sting...! 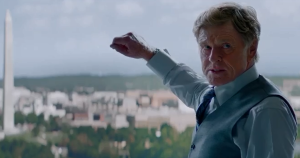 Fractured S.H.I.E.L.D. Robert Redford's Alexander Pierce confirms that, yes, he's a bad guy. Maybe not of the mustache-twirling variety, but certainly the stuff he says to Captain America about needing to tear down the world in order to build a new one, coupled with the vaguely menacing "I need you to do it again," suggesting that he's going to ask Captain America to act against his best instincts, paints a bleak picture of the S.H.I.E.L.D.'s highest-ranking officer. Of course, Nick Fury's asking him to do the same thing down the line, so it seems as though Cap might have his loyalties tested on a number of levels in this film. 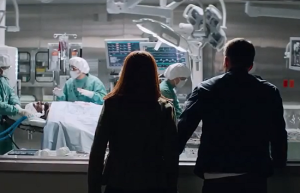 From S.H.I.E.L.D. to The I.C.U. Why is Nick Fury undergoing surgery? Well, we get an answer for that later in the trailer, but the fact that he's in surgery at all suggests that the injuries are pretty serious. After all, most car accidents featuring key characters in action movies are the kinds of things you walk away from. That Fury's life hangs in the balance almost certainly gives the story some stakes that would be difficult to establish otherwise. After all, fans will want to like Bucky, and to understand why he's gone rogue. In the comics, he violated Cap's no-kill code when he blew a big hole in the Red Skull...but here? Well, Cap doesn't have quite as strict a no-kill code to begin with, given that they're playing up his soldier and spy background. But soldiers and spies do have relationships with their partners and commanding officers...and all of those seem to be under fire in this trailer. Could this be...The Clairvoyant? "We're going to neutralize a lot of threats before the even happen," Fury tells Captain America at one point in the trailer, with Cap expressing reservations about that strategy. Could that be tied to this week's episode of Agents of S.H.I.E.L.D., where Reina told the man in prison that she needs him to find "The Clairvoyant?" That would certainly lend some credence to the report we made earlier, saying that there would be some things set up in Agents of S.H.I.E.L.D. that pay off big in Captain America: The Winter Soldier. 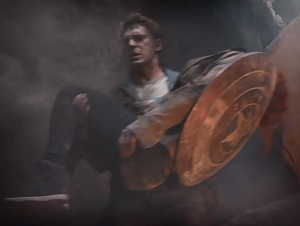 It's about partners No wonder S.H.I.E.L.D. plays such a key role; there seems to be a through-line in this movie about Captain America's partners, and the role they play in grounding him in the present day. In addition to the fact that the film's central antagonist is Bucky Barnes, Captain America's partner from the first movie, we have a lot of other stuff going on in this film that drives home how alone Captain America is in the modern world he's stumbled into. As mentioned above, we get a story where Fury is off the board, at least for part of it, and as you can see at left, there's a beat somewhere in the movie where an explosion nearly takes out Black Widow. It seems that it's all going to come down to Cap and Falcon--somebody he hardly knows--against his longtime best friend. That's got to be a very isolating story for a character who's generally understood to be pretty bright and upbeat.