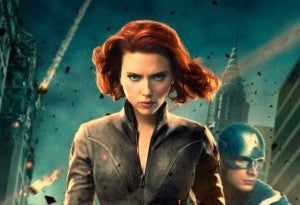 Don Jon, the weekend's buzziest movie, may feature Marvel's The Avengers star Scarlett Johansson alongside The Dark Knight Rises standout Joseph Gordon-Levitt (who also wrote and drew the film), but at least one of the two seems to be...well, not a huge fan of comic book movies. "The majority of the superhero movies have not been very good. They were simply not made well," she's quoted as telling VK (via CBM). "They were [about] spinning through the air and putting your hands on your hips. With the Black Widow we do something more, although of course the physicality and her image is important. To me, this character has given me a great opportunity. Joss [Whedon] has jumped the fence with Avengers to celebrate a female character that is not a simple ornament inside the group. He's not interested in just selling her physical attractiveness." Whether the "spinning through the air and putting your hands on your hips" thing is a direct reference to something--perhaps the Lynda Carter Wonder Woman?--isn't totally clear but it certainly seems that Johansson is another of those actors who is only now warming to the idea of superhero movies being able to overcome the worst examples of the genre. Nevertheless, she seems pretty happy with where she is with Marvel. "I love it. I think it is a sensational character. It is a professional, highly skilled, dangerous, mysterious superhero," Johansson said in the same interview. "I love playing it. I think that it is rare to find a woman sexy and intelligent on the big screen, able to fight anyone (including men) and overcome them physically and emotionally, and my character does it."