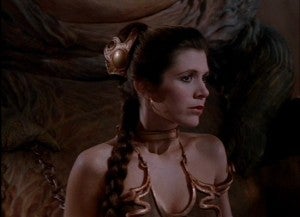 Appearing at Monster Mania earlier today, Star Wars star Carrie Fisher told an audience at her Q&A session that rumors that she and co-star Mark Hamill will appear in the forthcoming Star Wars Episode VII are just that--rumors--at least for now. While she said the reports are unsubstantiated at least for now, she added, "I'm hoping [to appear] too, I guess--without a metal bikini." Still, she said, the fact that she isn't officially on board for the upcoming sequels doesn't mean she doesn't have an opinion on what they should be about. "I think movies should have more conga lines," joked Fisher in front of a crowd at the convention's panel room. "Conga lines in the new Star Wars would be awesome!"

Carrie Fisher on Star Wars Episode VII: There Should Be Conga Lines But No Metal Bikini