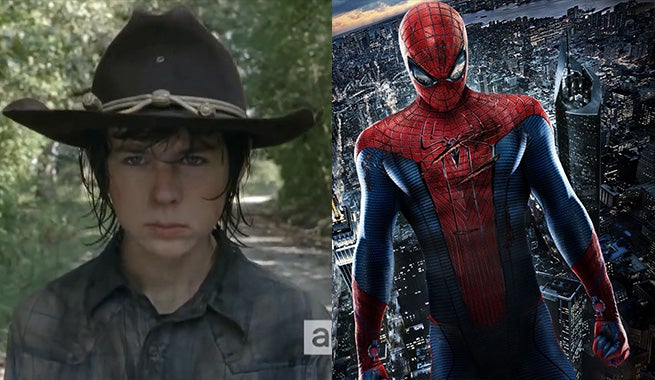 We're still wondering who Marvel's Spider-Man will be, but we know now one more person it won't be.

Chandler Riggs, who plays Carl on The Walking Dead, recently tweeted of his hopes of playing Spider-Man being dashed. "Good luck to whoever lands Spider-Man role - it would've been awesome for me," Riggs tweeted.

The tweet could just be in good fun. Even though Riggs is a celebrity actor on a hit comic book TV series, it doesn't mean he can't be a fan of Marvel movies like tons of other teenage boys. But, it is possible he auditioned for the role in Civil War and just found out he didn't get the part. The schedule between The Walking Dead and Marvel films would be unimaginable, so if he did audition, that could be a reason he didn't get the part. Perhaps casting will be announced soon?

Captain America: Civil War is currently in production for it's May 6, 2016 and Riggs is currently filming The Walking Dead's sixth season which is set for an October 2015 return.

Chandler Riggs Out Of The Running For Spider-Man?