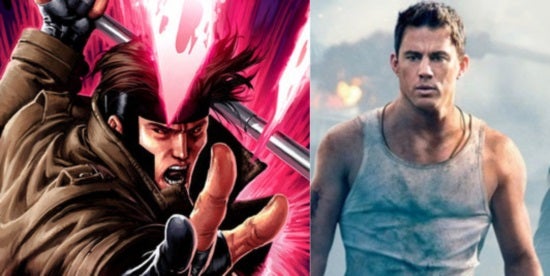 and Magic Mike star Channing Tatum will join the X-Men as Gambit, Executive Producer Lauren Shuler Donner confirmed on the red carpet for X-Men: Days of Future Past in London last night. "He's a rogue, he's a rascal, just like Remy LeBeau," the producer said in the video interview embedded below. "He can handle the action, as we know, and he's got a real good heart, I know him personally." She added, "He'll be great for Gambit, and he's a southerner too, he understands that world, and you know Gambit loves New Orleans." Rumors have been swirling around Tatum as a candidate for the job since he singled out Gambit as the superhero he'd like to play in an interview supporting White House Down (posted to YouTube in September and embedded at bottom). Shuler Donner later said that she'd like him for the job, but the level at which talks were happening was never totally clear. The character of Gambit, who was introduced in the '90s by Chris Claremont and Jim Lee, was played by John Carter star Taylor Kitsch in the 2009 film X-Men Origins: Wolverine, but due to its unpopularity with the fans, that's widely expected to be ignored. Even if it isn't ignored, though, much of the film took place in 1975, meaning that by the time the '80s-set X-Men: Apocalypse takes place, Kitsch growing into Tatum wouldn't be entirely out of the question. X-Men: Days of Future Past (which doesn't star Tatum) will open on May 23. X-Men: Apocalypse is expected in theaters May 27, 2016.