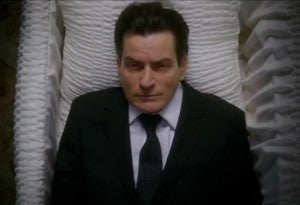 In a new podcast interview with stand-up comedian Jay Mohr, Anger Management star Charlie Sheen revealed that he once tried to get himself cast in a film adaptation of Spider-Man during the late '80s or early '90s at the now-defunct Orion Pictures. In spite of a career that's featured successful work on television and in film, and across action, drama and comedy, Sheen has never appeared in any comics adaptation. His father, legendary actor Martin Sheen, appeared as Ben Parker in The Amazing Spider-Man earlier this year. Sheen's own Anger Management was just picked up for an additional 90 episodes on FX. "I had an office at Orion at the time, and I brought them Spider-Man," Sheen told Mohr. "I said, 'Look, in a couple of years, I'll be too old to play Peter Parker.' And they said, 'Yeah, we're just thinking that cartoons are not the future, comic books are not the future.' And I said, 'But it's Spider-Man, I'm perfect.' And they were like, 'Nah, we're gonna wait.'" He said of Orion Pictures--the studio behind Bill and Ted's Excellent Adventure, Dances With Wolves and The Silence of the Lambs, but which went bankrupt shortly after those hits--"They didn't know s--t." The star, who had a string of box office successes around that time including the Major League and Hot Shots! franchises, reportedly had someone working with him who he claims was capable of acquiring the rights, which Orion never possessed. In a time just prior to Wall Street, it's easy to imagine that Sheen might have had the wide-eyed innocence to pull off Peter Parker and even the physicality for Spider-Man, but somehow it's still hard to see it actually happening. What do you think?