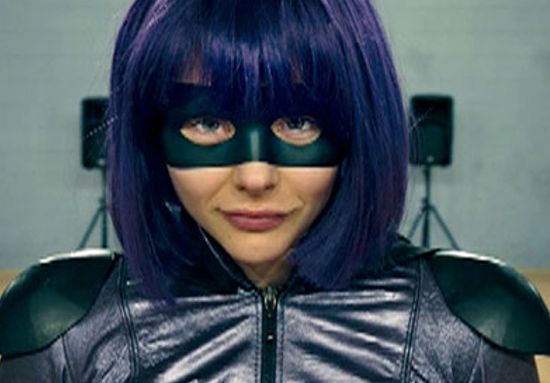 Around the time Kick-Ass 2 was headed to theaters last year, comic book creator and executive producer Mark Millar revealed to fans that he was working on a script for a prospective third movie in the franchise.

That would have closed out the series; while there were four total miniseries in the comics (Kick-Ass, Hit-Girl, Kick-Ass 2 & 3), the second film had adapted two of them, putting the movies in a position to wrap up the story with Kick-Ass 3 if only it were to get the green light.

It's been about a year, and the most recent comments from Millar sounded far less convinced the movie would ever happen, essentially acknowledging that executive producer and Kick-Ass director Matthew Vaughn would be the ultimate decision maker, and that the pair hadn't spoken about the possibility in a long time.

Enter Chloë Grace Moretz, whose turn as Hit-Girl was the highlight of the first film for many fans and who has become a leading lady at a young age, in no small part, thanks to the attention she got from it.

"Sadly, I think I'm done with the character," Moretz acknowledged in a new interview with Digital Spy. "Hit-Girl was a very cool character, but I don't think there will be any more movies."

Pressed for details, she added, "Kick-Ass 2 was one of the number one pirated movies of the year, but that doesn't help us because we need box office figures. We need to prove to the distributors that we can make money from a third and a fourth movie - but because it didn't do so well, we can't make another one."

The first movie was heavily pirated as well, but it performed better in the theaters and was released at a time when the home video market was a bit healthier, allowing DVD and Blu-ray sales to play a significant role in determining the viability of a sequel. The second film had no such luck on home video.

Moretz is currently appearing in If I Stay, a young adult adaptation that opened in the #3 spot at the U.S. box office this weekend behind comic book adaptations Guardians of the Galaxy and Teenage Mutant Ninja Turtles.