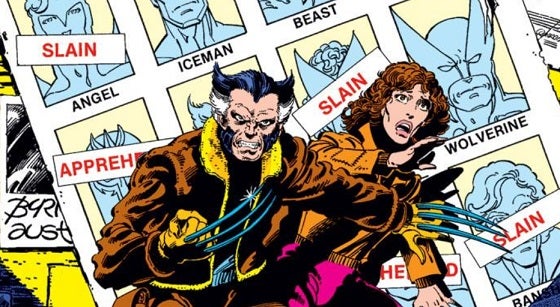 When thinking about the new X-Men movie, X-Men: Days of Future Past, most comic book fans can only think of one person - the co-writer of the 1981 story arc, Chris Claremont. Claremont was pivotal in the creation of the modern day X-Men. From the Dark Phoenix Saga and the initial death of Jean Grey to co-creating many major X-characters like Shadowcat, Emma Frost, Siryn, Sabretooth, Rogue, Psylocke, and even Gambit, it's safe to say that the world of the Uncanny X-Men would be completely different had it not been for Chris Claremont. So what does Claremont get for his brilliant work? Well, not much aside from a cameo in X-Men: The Last Stand, where he is credited as "Lawnmower man". With X-Men: Days of Future Past opening this weekend, with a whopping budget of $225 million, you'd think that Claremont was brought on board in some form as a consultant to deliver the best movie to fans that they could. Well, this weekend at the Motor City Comic Con, Claremont opened up during his panel and let fans know what he thinks about the X-Men films (he stated at his panel that he hasn't even seen X-Men: Days of Future Past yet) as well as Sony's Spider-Man flicks. On X-Men: Days of Future Past: "They got it right. At least in the title. They got big robots in it. It's very 70′s. I don't know what the TARDIS is doing in the White House, but that's a totally different story. My basic feeling is that is probably the richest, most talented, most 'box-office-holy-cow-cast' I have ever seen. You can take any two members of that cast and build an award-winning successful movie. And they have! I think it's way cool and we'll know in a week." [When a panel attendee asks if he has seen it, he says he hasn't, and then the panel attendee asks Claremont if he was asked anything about it.] "No. It's Fox. What's the point? The producer asked me if I would fly out to L.A. and participate in press conference with the actors. I said, 'Hell Yes!' She pitched it to the Fox high ups and they said 'Oh no. We just need the actors. The original writer of the source material is not a smart move.' I hate to say it, but my softest response is my only response: It's not my 120 million bucks. It's Fox's and they get to call the shots. Yes I would love to be a part of it, but by the same token Marvel isn't screening it either. So take that for whatever you will." Claremont on how it feels to see his story arcs played out on the big screen: "Well the interesting story was I was called from Darren Aronofsky's people. They were just setting up their shop in Brooklyn and they asked me to come down and read Chris McQuarrie's first screenplay and I thought 'Why?'" [At this point someone from the crowd asks if Claremont is talking about X-Men Origins: Wolverine.] "No! THE WOLVERINE! There is the X-Men Origins: Wolverine, which is 43 minutes of [Claremont pretends to dry heave] and about 20 minutes of 'Not so bad.' Let's face it Hugh Jackman - absolutely cool. X-Men Origins was forced on the studios by Fox because it was thought that the general film going audience would not understand who he is or what he is or why he is. He needed an origin. My feeling was 'Dude, it's Hugh Jackman! Who cares?' He walks out on-screen and we go, 'That's Wolverine!' and the rest is irrelevant. But what do I know. Not only am I just a civilian when it comes to movies, I also live on the East Coast! Besides the fact that it's one of the films that has 3-4 of the lines I wrote in it, which made me an impossibly annoying person to go to the movies with. My wife was hitting me in the kidneys because I wouldn't shut up. But Hugh Jackman is saying 'I'm the best at what I do.' YES! Now you know why I'm paid by the word. Never say in a sentence what you can say in a volume. Or as George R.R. Martin does in five volumes!" Claremont on Amazing Spider-Man 2: "The problem with superhero movies is you hope you get The Avengers, but sometimes the reality is you get Spidey 2.2. I call it Spidey 2.2 because if you call it Spider-Man 2 people go, 'Wait, do you mean the Spider-Man with Alfred Molina because that one was really good, you know?' Yes, it was really good because it was directed by Sam Raimi who is really good. Sam foolishly had this attitude with Sony where he said 'How about for the third movie we has LESS characters!' and Sony was like 'NOOOOO! WE WANT MORE CHARACTERS! 3 CHARACTERS IN THE THIRD, 4 IN THE FOURTH AND 5 IN THE FIFTH!' Well, oddly enough, this is the fifth movie and what do we have? Sinster Six! Yes, six characters cause they can't count. I'm making fun of Spidey because I can and because the X-Men movie hasn't come out yet!" X-Men: Days of Future Past opens this Friday, May 23rd, and stars Hugh Jackman, James McAvoy, Michael Fassbender, Jennifer Lawrence, Halle Berry, Anna Paquin, Ellen Page, Nicholas Hoult, Shawn Ashmore, Peter Dinklage, Ian McKellan, and Patrick Stewart. Chris Claremont is currently writing Nightcrawler for Marvel.

Chris Claremont On X-Men: Days of Future Past And Spider-Man Films