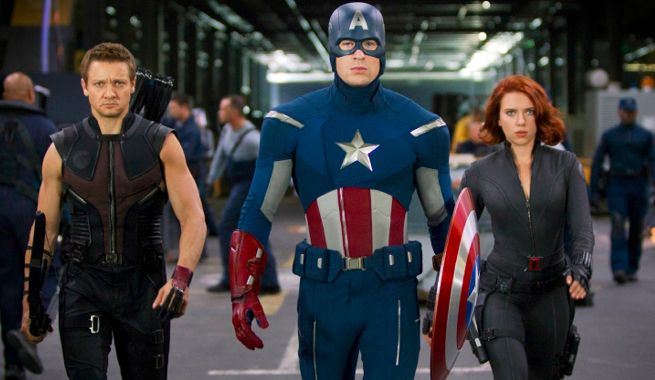 During a video interview with Digital Spy, it was pointed out to Chris Evans and Jeremy Renner how fans had shipped Black Widow with either Hawkeye or Captain America. Then, the interviewer asked what they thought about Black Widow now being with Mark Ruffalo's Bruce Banner in Avengers: Age of Ultron.

Renner joked, "She's a slut." Evans laughed at the response, adding, "I was going to say something along that line. She's a complete whore."

After the interviewer added whatever movie it was Black Widow would just be the sidekick, flirting away, Evans joked, "She'll just flirt with everybody." Then, Renner quipped, "She has a prosthetic leg anyway."

Even though Renner and Evans were clearly joking, the derogatory words used to describe Black Widow immediately created a stir online in social media. The comments have quickly gone viral and been picked up on a number of major news sites.

Update: Both Chris Evans and Jeremy Renner have issued statements apologizing for their Black Widow remarks during the interview.

Evans said, "Yesterday we were asked about the rumors that Black Widow wanted to be in a relationship with both Hawkeye and Captain America. We answered in a very juvenile and offensive way that rightfully angered some fans. I regret it and sincerely apologize."

Renner said, "I am sorry that this tasteless joke about a fictional character offended anyone. It was not meant to be serious in any way. Just poking fun during an exhausting and tedious press tour."