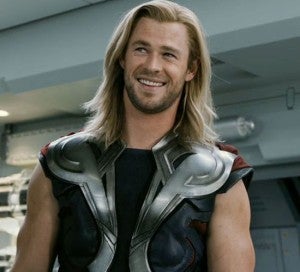 Among fans online, there is often heated debate about Marvel movies vs. DC Comics movies. While some fans like both Marvel and DC movies, other fans are fiercely loyal to either Marvel or DC. In an interview with Jake Hamilton (via CBM) to promote his new film Rush, Chris Hemsworth was asked about the Marvel & DC rivalry, and he laid down a Thor-sized hammer on DC fans with his reply. "We're just winning aren't we?" said Hemsworth. "That's not really a rivalry." Hamilton laughed at Hemsworth's answer and agreed that argument could definitely be made. Hamilton pointed out that the Avengers won out over The Dark Knight Rises when they were released in the summer of 2012. Hemsworth laughed, "Did we? Good." Then, Hemsorth continued with a little bit more diplomatic response. "Look you can't not be excited about your film being part of something that does that well, but it all kind of benefits each other. If one film opens big, then most likely people want to come back to the movies and see something else. So it all feeds into each other," added Hemsworth.