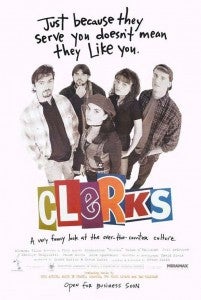 A couple days ago, Kevin Smith shocked the world when he announced that he would be making Clerks III and that it would be his last movie as a writer/director. While initially there was little additional information, Kevin Smith has slowly been releasing more details via Twitter. Here is what we know about Clerks III so far. Kevin Smith has confirmed that Clerks III will be released in 2014. While Clerks II might have switched to color, Clerks III will go back to the black & white style of the original movie. Smith tweeted, "YES, sir. I'm goin' out like I came in: devoid of talent AND color! #FullCircle son!" Clerks III will be released as a SModcast Pictures presents a View Askew Production. While a script hasn't been finished, Clerks III has already been outlined. Smith tweeted, "I've got a 70 page outline for Clerks III. Transitioning to full script won't take long." While a producer has not been officially announced, Kevin Smith has asked Scott Mosier to return via Twitter. When originally announcing the project, Kevin Smith mentioned waiting for Jeff Anderson to sign on. When asked via Twitter if Jeff might hesitate to sign on for Clerks III, Smith replied, "Already has. It's okay: part of my job is to convince him over time..." So apparently, Jeff Anderson still needs some convincing to return. As far as the storyline, Kevin Smith hasn't given up much info. Smith did tweet, "At start of CLERKS III, Dante's been gone for 8 years. At end of Act II, Silent Bob breaks his back. By Act III, Randal's real name = Robin." However, we're pretty sure he's joking on that one. When asked do you envision Clerks 3 as Jedi, Last Crusade, or Back to the Future 3, Smith tweeted "It's more Cinema Paradiso than anything else."