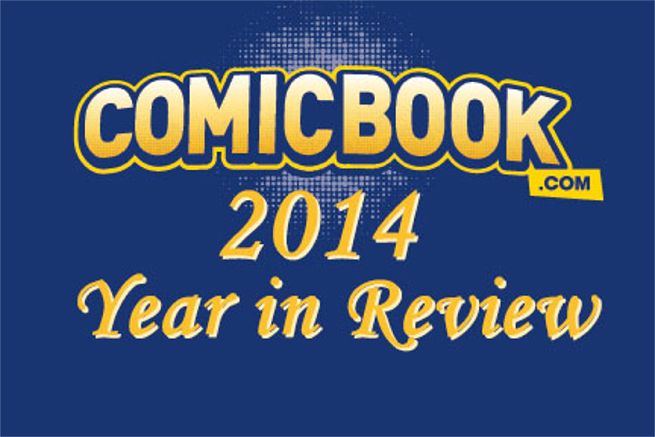 It has been an incredible year for comic book and pop culture news. Not only has it given us a lot to look back on, but also a ton to look forward to. That's why Comicbook.com is bringing you the Yearly Round-Up of the biggest stories from 2014!

Who could forget the Ice Bucket Challenge. The fundraiser that aimed to raise awareness and funding for ALS treatment took the nation by storm and raised approximately$220 million globally. Millions of people poured buckets of ice water on their head and posted videos to social media, even Iron Man, Groot and many other on screen super heroes, becoming real life heroes for those battling the disease.

Warner Brothers announced a full slate of DC character films. Starting with Batman vs. Superman: Dawn of Justice, a lineup of films including Suicide Squad, Aquaman, Wonder Woman, Justice League, and more were announced to run through 2019. Luckily for you, we have a handy graphic outlining DC's full slate of films in development! Not only did we get the titles and dates, but we even got some impressive casting news. Suicide Squad is packed with A-Listers, as well as Jason Mamoa finally being confirmed as Aquaman.

Weeks after Warner Brothers announced their DC movie slate, Marvel studios held an event in Los Angeles to announce their full list of plans for phase 3. After Ant-Man wraps up phase 2, Captain America: Civil War will kick off phase 3. Although the hack on Sony revealed attempts by Marvel to attain rights to Spider-Man for the film, the deal fell through, but on the brighter side, Robert Downey Jr joined the cast and we will really see Captain America and Iron Man go head to head in their political battle on screen. After a handful of other exciting films, including Black Panther starring Chadwick Boseman as the Wakandan hero, phase 3 will conclude with a two part Avengers: Infinity War, in which Thanos takes on everyone in the Marvel Universe, according to Josh Brolin.

While on the topic of Marvel Studios, who could forget that little movie that hit theatres on August 1? Oh, you know, Guardians of the Galaxy? The movie that so many analysts and even fans thought would be Marvel Studios' first failure? Well, the Guardians took the box office by storm, becoming the highest grossing film domestically in the U.S., beating some fierce competition from The Lego Movie, Captain America: The Winter Soldier, and The Hunger Games: Mockingjay Part 1, which is still in theatres. This financial success comes along with impressive critical praise and has a whole lot of new fans high on believing that Marvel Studios truly can do anything.

Spoiler alert for The Walking Dead! The Walking Dead season 5 continued to break records and score more ratings than Sunday Night Football week after week. In doing so, though, it said goodbye to one of its core characters. In its shocking and devastating midseason finale, fans bid farewell to Beth Greene. This did not sit will with many fans, though. One fan started a petition to bring back Emily Kinney's character, one way or another, and the petition grabbed over 50,000 signatures within a few days. Will Beth come back to life? Well, highly doubtful, even as a walker, but maybe we will see her in a flashback.

Movie trailers gave us so much to look forward to this year and a reason to look back. To the blame of Hydra, The Avengers: Age of Ultron trailer leaked online before Marvel planned on releasing it, so they went ahead and released it on YouTube breaking a record for views in a week and giving fans a look at the Hulkbuster armor for the first time (outside of Comic Con's Hall H, anyways). The record was short lived though, because a few weeks later Jurassic World's trailer hit Youtube, scoring a couple million more views in its first week, followed by Star Wars Episode VII's trailer, which was even viewed a few million more times than Jurassic World's. 2015 is unquestionably going to be a great year for moviegoers and comic fans.

Fox's new reboot of the Fantastic Four took the liberty of making a few changes. Victor von Doom isn't Victor von Doom, the Human Torch and Invisible woman have altered back stories. The Lego Movie is getting a sequel and a Batman spinoff. The Interview got pulled from theatres and reinstated. Marvel has a huge summer lineup of comic books in 2015. Peter Jackson won't make a Marvel movie. And The Flash and Arrow had an epic TV crossover.

Those were some of the biggest stories from 2014. We obviously can't cover everything in one article, so what stories from this year were your favorite? Which news did you hate hearing? Make sure to let us know in the comment section or by tweeting at us @comicbookdotcom. On behalf of Comicbook.com, I am B.D. Comito. See ya next year!