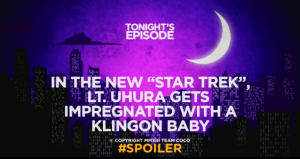 Late night television mainstay Conan O'Brien may never have J.J. Abrams on his show again. That's because most of the many, massive Star Trek Into Darknesses spoilers he aired on Tuesday's show flew under the radar, the TBS host replayed them all as part of a two-minute segment poking fun at ComicBook.com for having missed them when we pointed out that he may have spoiled one of the film's key mysteries. 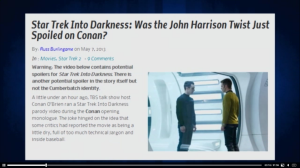 The "true" identity of John Harrison, Benedict Cumberbatch's villain in the film has been the source of more discussion than any other element of the movie. Whether he's Khan Noonien Singh, Gary Mitchell, a Klingon or something else entirely has been the source of thousands of online articles, with director Abrams doing his best to keep the secret quiet until the film hits theaters--which will be tomorrow in the U.K. So when we noticed that the credits O'Brien used in a Star Trek sketch identified Cumberbatch as someone other than "John Harrison," we wondered aloud whether he might have just given up the game. Well, a handful of readers pointed out that he probably just took the credits straight from IMDb, which is a user-edited site and not always reliable until after the film has been released. O'Brien, for his part, assured fans that his credits were fake--but then called us on the carpet for a litany of spoilers we missed.* In the interest of journalistic responsibility, we felt obligated to report on the things that we had missed while fixated on the credits sequence.

We're really not sure how we missed those. We promise to do better in the future. In the meantime, expect more details on these shocking spoilers as the film's opening draws closer. *Please note that some spoilers may not actually occur in the film.

Conan O'Brien Spoils The Crap Out of Star Trek Into Darkness