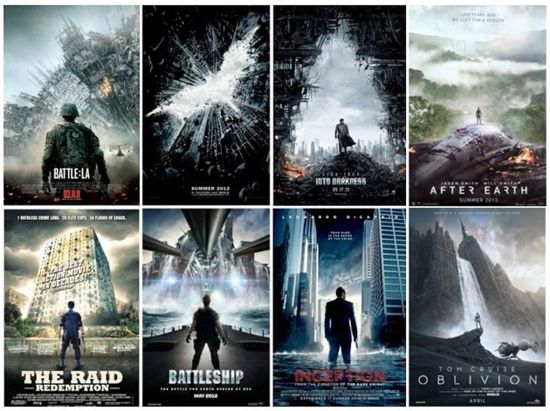 At Comicbook.com, we've certainly done a lot of comparisons between various movie posters in the past. Several of the posters for Christopher Nolan's movies have had a looking up through buildings theme. Also, the new Star Trek Into Darkness poster looks an awful lot like one of The Dark Knight Rises posters, including how the logo is created through destroyed buildings. However, a new copycat movie posters image has gone viral on Twitter, which really shows just how similar several recent movie posters are. The image features posters for Battle LA, The Dark Knight Rises, Star Trek Into Darkness, After Earth, The Raid: Redemption, Battleship, Inception, and Oblivion. Seven of the eight posters feature the back of a man, who is looking out at something. In most cases, what he is looking at is buildings, but not always. The Dark Knight Rises poster is the only one not featuring a man's back, but it has the building theme which resonates through several of the other posters. With all these posters looking similar, the question becomes who is copying who? Well, many of the posters are for films that haven't been released yet like Star Trek Into Darkness, After Earth, and Oblivion. But of the films that have been released, Inception had the earliest release date, so it looks like Christopher Nolan deserves the credit for being the original.