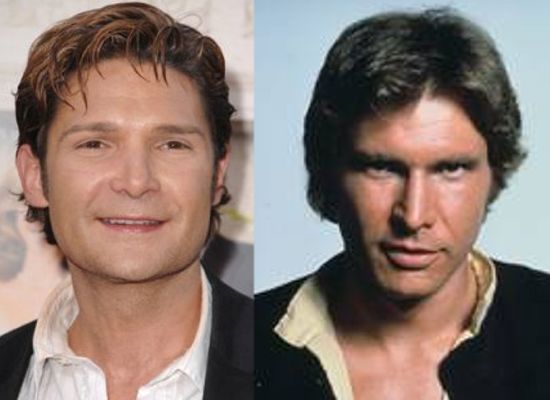 The folks over at MovieWeb have scored possible the biggest exclusive yet regarding the upcoming Star Wars Episode 7 movie. Not since the Washington Post revealed that Robert Pattinson was interested in the Jar Jar Binks role has there been Star Wars news this earth shattering. Apparently, Corey Feldman is interested in the role of playing Han Solo's son. Feldman is know for his roles in eighties movies like Lost Boys, Gremlins, and The Goonies. Feldman said, "More than anything, I want a part in that new Star Wars franchise." Why Han Solo's son? Well, because the actor says he resembles Harrison Ford. Feldman does have a point there. We only wish Feldman had thought of this strategy back when they were casting Indiana Jones and the Kingdom of the Crystal Skull, because we would have liked to see him beat out Shia LaBeouf for the role of Indy's son. Feldman thinks Disney should bring back all the original characters from Star Wars as the older generation. Then, they should cast their kids as a new young brigade, which he would be a part of. Nevermind, that Feldman's over forty himself, so perhaps he should describe it as a new middle-age brigade. Of course it's not only Star Wars Episode 7 that Corey Feldman has his sites set on. Feldman said, "Let's get Corey in the new Star Wars movie, lets get Corey back as Donatello in Ninja Turtles with Michael Bay, and lets get Corey back to reprise his role as Tommy Jarvis, to make the fan anticipated sequel, above all, Friday the 13th Part XIII: Jason Vs. Jarvis in 3D. That is what I'm pitching."