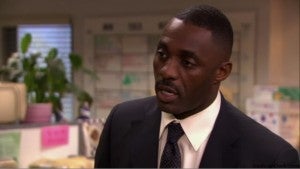 This could be interesting, considering that a number of hardcore fans got all worked up when the studio decided to go with a blond actor for the role. Rumors have swirled that even though Daniel Craig still has a couple of more James Bond movies on his contract following Skyfall, the filmmakers may be already seeking a replacement, presumably so they don't have to cram such an important casting decision into the short window they want to have between movies in the successful franchise. Up until now, though, no specific names had come to the surface In an interview with Skyfall's Naomie Harris, though, the actress revealed that not only are the filmmakers considering nonwhite actors to play James Bond, but that she knew of a particular (and much-loved) actor who had already met with producers about the job. "I didn't realize that there was this talk and then I did a film with Idris [Elba] and he said that he met [James Bond producer] Barbara Broccoli and that it does seem like there is a possibility in the future that there could very well be a black James Bond," Harris told The Huffington Post. The actor, best known for his role on The Wire, also starred in Prometheus earlier this year. He has starred in comic book adaptations including Thor (and Thor: The Dark World), in which he plays Heimdall; Ghost Rider: Spirit of Vengeance; and The Losers. He'll also star in Hellboy director Guillermo del Toro's upcoming science fiction actioner Pacific Rim, for which there will be a comic book prequel released by Legendary Comics.

Could the Next James Bond Be Black?