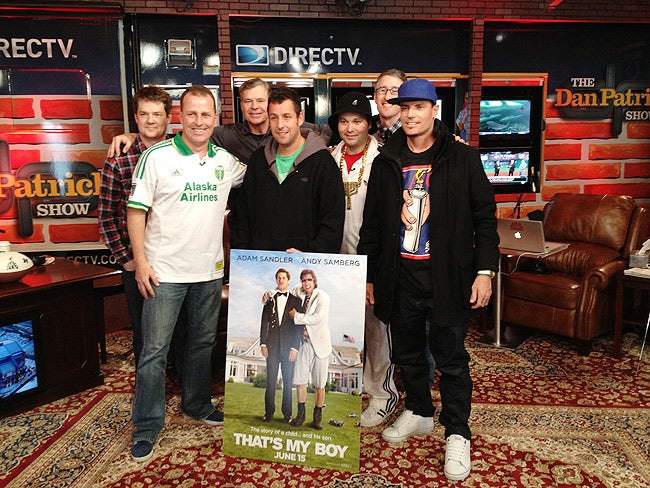 Harry Potter and Home Alone director Chris Columbus will tackle the movie, in which aliens invade the Earth after they misinterpret video of classic arcade games as an act of aggression. The President, played by James, has to call upon a group of former video game champions including Sandler, Peter Dinklage and Josh Gad, to save the day.

Krakowski will play the First Lady, also the ex-girlfriend of Sandler's character. Her casting was widely reported in the trade press today.

Patrick and company will play a version of themselves, apparently; on his radio show today he said that he had been invited to play a journalist interviewing James's President Will Cooper in the film. Their cameo would be filmed in August on a date that, as it turns out, is Patrick's anniversary -- the only potential obstacle to his taking the job.

Patrick and the Danettes, friends of Sandler's, also appeared in his 2011 bomb Jack and Jill. Patrick by himself has appeared in a number of Sandler's films, including both Grown Ups movies, The Longest Yard and Blended. He will next appear in the Entourage movie.

Pixels will have a significant presence at Comic Con International: San Diego next week. From Thursday to Sunday, Sony will host the "Pixels Electric Dreams Factory Arcade" at the Hard Rock Hotel, where gamers 13 and over with Comic-Con badges can play '80s-era arcade games. Each day, the top five scorers on the leaderboard for any of the eight participating games will be automatically entered in two drawings: a daily prize drawing for a chance to win a PlayStation 4, and the grand prize drawing for a chance to appear in a walk-on role in Pixels. The movie will also be presented along with Jack Black's Goosebumps at the Sony panel.