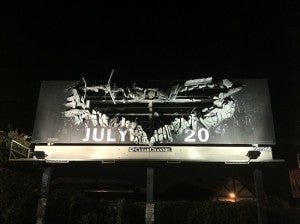 Courtesy of Slashfilm, here's a terrific Dark Knight Rises billboard that's currently dangling its wreckage over Sunset and La Brea in Hollywood. The movie itself may not be in 3D at the director's instruction, but the billboard is, with what looks like construction debris protruding out from it in all directions. It's indicative, of course, of the wreckage and riot damage seen around Gotham City in The Dark Knight Rises, where Bane manages to  collapse a football stadium, blow up the bridges and lead a revolt through the streets against the city's wealthy elite. The Dark Knight Rises will be in theaters July 20.