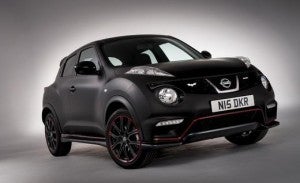 Nissan U.K. is giving away a Dark Knight Rises-themed Nissan Juke NISMO, and Car and Driver has provided U.S. readers with their first look at the car. We'll give you the specifics here, minus the snark intrinsic to an automotive publication talking about a mid-range sedan masquerading as the Batmobile. We see the irony, but the zany cool of it outweighs our cynicism. A matte-black exterior with silver bat-signal logos recalls the Tumbler, the Batpod or other Nolan-inspired Batman vehicles, although the red highlights hint at the genealogy of the Batmobile from the 1966 Adam West series. For good measure, the car features small bat-signals mounted under the side-view mirrors that project the Batman logo onto the ground at night, as well as interior accents including a signal that shines the bat-signal on the ceiling of the car. If you're in the United States, it'll be a while before this car even makes it here, and unfortunately you won't be able to enter this contest for a one-of-a-kind retrofit. In the United Kingdom, though, check out the contest--and take pictures for us if you win. The Dark Knight Rises is available on DVD, Blu-ray and digital download today.