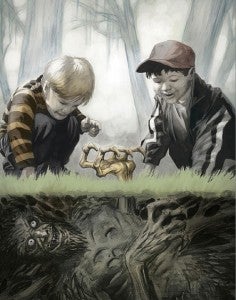 In a move that seems to confirm that Alan Moore's Swamp Thing run will be a key touchstone for the film, Guillermo del Toro has confirmed that his upcoming Justice League Dark-like film, Dark Universe, will feature not only John Constantine and Swamp Thing but also the Floronic Man. "The route we're going is Constantine is our lead. Constantine is the guy who leads us in and out of the plot," del Toro told Collider. "We have Swamp Thing, Etrigan, we have Zatanna, we have—I will spoil it—the Floronic Man. We have stuff that those who love the darker side of the DC Universe are going to appreciate, and we're trying to be true to the origins of the characters." Most of those were already known, though the Floronic Man is a new touch. The filmmaker added later in the interview, "I'm literally playing with two of my oldest and most favorite characters in my life—Swamp Thing and Etrigan. These were the guys I was drawing with crayons when I was a kid. I cannot tell you how happy I am, but I am finishing my bible, and then I deliver that bible, which is about 45 pages, to Warners, and we have a screenwriter that we like and that we talk to, but he is writing his own movie right now and is thinking about it. But I am going to try to wait for him." As for who that screenwriter might be, he remained mum--but what's arguably the most interesting is his comment that he may not direct the film and may only produce it. While that's not uncommon for the over-scheduled del Toro, it does seem to suggest that Warners is committed to getting Dark Universe made, even if the director's schedule becomes too crowded. Check out the WonderCon video below.