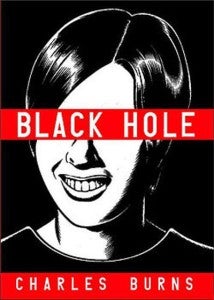 Here's a comic book movie project that there hasn't been any news on in awhile, which now seems to be moving forward. Black Hole was a 12 issue comic book limited series by Charles Burns, which was published between 1995 and 2005. It was later collected and reprinted as a graphic novel. Black Hole was set in the suburbs of Seattle during the mid-seventies, and it revolved around a group of middle class teenagers. The teenagers contracted a mysterious sexually transmitted disease known as "the Bug" or "the teen plague", which caused them to develop bizarre unique physical mutations. According to The Hollywood Reporter, a Black Hole movie is now moving forward, and the project will team Brad Pitt's Plan B production company with director David Fincher. No official release date or casting information was revealed on the film.