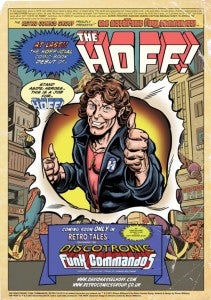 Everyone has an opinion when it comes to Ben Affleck being cast as Batman, and we do mean everyone. In a segment on ET Canada, David Hasselhoff was asked to read a selection of Batfleck tweets. At first, The Hoff tried to defend Ben Affleck against negative tweets, before eventually throwing in the towel and just warning Affleck that he should not read Twitter. After reading a tweet asking if George Clooney gave Ben Affleck tips on how to suck as Batman, The Hoff said, "You have a problem, calm down, be positive, life is good, get away from your twitter." Perhaps, most amusing, The Hoff read the Wil Wheaton tweet: "Really looking forward to seeing Affleck bring the depth and gravitas to Batman that he brought to Daredevil and Gigli." Evidently, The Hoff has never seen Gigli, as after struggling to pronounce the name, ET Canada told him to just skip that one. After reading a tweet from a Bat fan saying for the first time ever they wanted Superman to win, Hasselhoff said, "Ben Affleck, I have a message from The Hoff. Don't read Twitter."