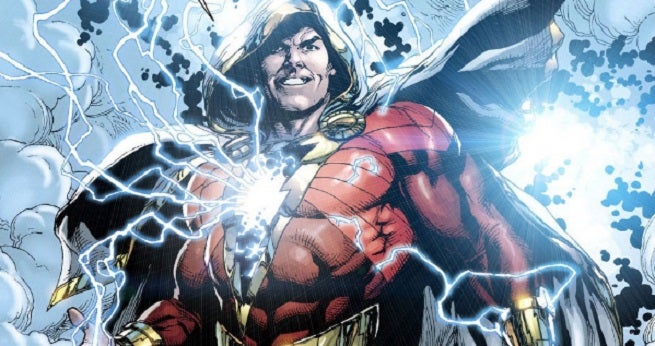 Despite some remarks that led fans to believe otherwise, Warner Bros.' upcoming film adaptation of DC Comics' Shazam will be set in the same, shared cinematic universe as Man of Steel, Batman V Superman: Dawn of Justice and Justice League.

That's according to a year-end wrap-up piece over at the DC Blog, where the publisher named the announcement of the film slate as one of the year's "Moments That Mattered."

Yes, there were rumors of some sort of film slate, mentions that Warner Bros. had "big plans" for DC Entertainment and occasional informal announcements (like the news that New Line had a Shazam movie in development). But for fans who were hoping to see a DC Cinematic Universe similar to what they've seen from other publishers, one that included super heroes other than Superman or Batman, there didn't seem to be a lot to talk about.

That changed on October 15, 2014, when Warner Bros. revealed a full slate of ten DC Entertainment feature films all set within the same universe. The list included the movies we were hoping to see—Wonder Woman will get her own film, while the Justice League will get TWO movies. However, it also included quite a few surprises. A standalone Cyborg movie! A Flash feature starring Ezra Miller! A Suicide Squad movie! And coming in 2016, no less!!

Referring to the ten films as "all" taking place in the same universe is telling. Comments made by star Dwayne "The Rock" Johnson on Twitter had led some fans to question whether it would take place in the same universe or not, but it appears that, if anything, the wall between Shazam and the other DC movies will be more like the separation between Guardians of the Galaxy and the rest of the Marvel Cinematic Universe: A somewhat permeable wall which allows the filmmakers maximum freedom while still giving the studio the option of sharing characters back and forth.