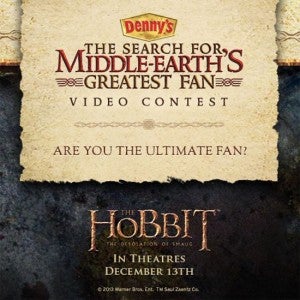 was first to report yesterday on a new Denny's contest involving "The Hobbit: The Desolation Of Smaug." Now, we bring you all the details on the contest from the official press release. Denny's, America's iconic family diner, announced today its renewed partnership with Warner Bros. Pictures to bring another taste of Middle-earth to the national diner inspired by the long-awaited fantasy adventure "The Hobbit: The Desolation of Smaug," a production of New Line Cinema and Metro-Goldwyn-Mayer Pictures (MGM). To celebrate the highly anticipated movie, Denny's is inviting Hobbit fans to showcase their dedication in "The Search for Middle-earth's Greatest Fan" contest for the chance to win an exclusive trip to the movie's world premiere screening. Beginning today, through October 31, Hobbit enthusiasts are invited to visit www.dennysfanquest.com  and upload a one-minute video demonstrating why he or she should be named Middle-earth's greatest fan. One grand prize winner will be selected by Academy Award®-winning filmmaker Peter Jackson to receive a trip for two to attend the film's world premiere screening.  Four runner-ups will receive free Denny's Grand Slam®'s for one full year. "We're thrilled to continue our tradition of celebrating 'The Hobbit' movies by engaging with fans in such a fun and unique way," commented Frances Allen, chief brand officer of Denny's Corporation. "We hope that these exciting plans, including awarding the ultimate 'Hobbit' fan with a once-in-a-lifetime experience, will entice and engage our guests once again as they come back to enjoy new and authentic Middle-earth-inspired dishes at Denny's." Blair Rich, Executive Vice President of Marketing of Warner Bros. added: "This contest represents a creative way to hear from passionate fans of Middle-earth, while celebrating the debut of the second film in the Trilogy. Denny's continues to help spearhead excitement around 'The Hobbit' films, and we, along with our partners at New Line and MGM, are delighted to see them roll out another wonderful Middle-earth-inspired promotion for fans and newcomers alike." In addition to this one-of-a-kind contest, guests will have plenty of opportunities to get a taste of Middle-earth at Denny's. Beginning November 5, fans can enjoy a variety of movie-inspired dishes from the limited-time-offer menu and access a variety of exciting movie content in-store, including an augmented reality interactive placemat, a series of "Elvish Made Easy" social posts and an exclusive behind-the-scenes film content piece.  Denny's is also giving guests a sneak peak at the making of their film-themed TV spot. To add to the authenticity of Denny's partnership with Warner Bros. Pictures, the brand created 'The Hobbit: The Desolation of Smaug Advisory Board,' an exclusive group comprised of influential 'The Hobbit' movies-oriented media outlets, to weigh in on select creative elements of the campaign. "Working closely with 'The Advisory Board' has provided us with genuine feedback and insights on many elements of the campaign, ensuring that we give both Hobbit fans and our diners a truly authentic experience," added Allen. "The Hobbit: The Desolation of Smaug," is set to release in theaters this December, and is the second of three films adapting the enduringly popular masterpiece by J.R.R. Tolkien. For more information about Denny's menu inspired by "The Hobbit: The Desolation of Smaug" or to find a restaurant near you, please visit www.dennys.com.