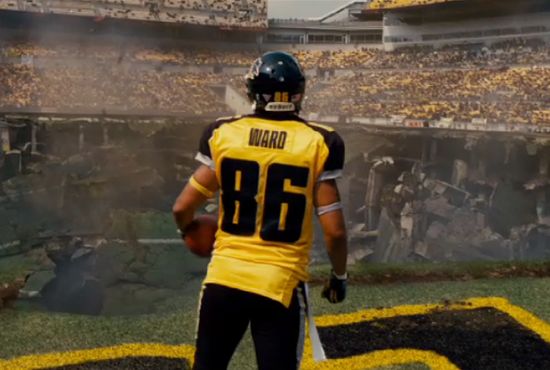 Because of various tragedies and unfortunate events that befell the stars of The Dark Knight, there was an internet rumor several years back that The Dark Knight was cursed. Some of the tragedies blamed on The Dark Knight curse included the death of a special effects technician in a truck accident during a Batmobile test run, Heath Ledger's death due to an accidental prescription drug overdose, Morgan Freeman's hospitalization due to a car accident, and Christian Bale's arrest after a dispute with his mother and sister. There hasn't been much talk of the Dark Knight Curse lately, but that could soon change, as there does seem to be a trend developing with The Dark Knight Rises. During filming for The Dark Knight Rises, it was reported that an extra passed away from a heart attack during rehearsals. There was also a big crash involving the Batwing while shooting in Pennsylvania, but thankfully no one was injured. Still, it can't be considered good luck to have a major piece of equipment smashed up on a street lamp. Now, the latest incident that could add credence to the possibility of a Dark Knight Rises curse is that the Pittsburgh Steelers have announced that they are cutting receiver Hines Ward. As Dark Knight Rises fans know, Hines Ward appears scoring a touchdown in the football stadium scene on the second Dark Knight Rises trailer. The scene caused quite a stir among Batman fans because some associated the name "Ward" on the back of a football players jersey to be a reference to Burt Ward, who played Robin in the sixties Batman TV Show. While Hines Ward did not have one of his better seasons last year and was due a hefty salary this upcoming season, he had been with the Pittsburgh Steelers for fourteen years and at least seemed willing to negotiate to stay with the team. After the announcement was made, Hines Ward released a statement, "This isn't how I wanted this chapter of my career to end. I did everything in my power to remain a Steeler and finish what I started here 14 years ago." Maybe, Ward shouldn't have taken that football player role in The Dark Knight Rises. The Dark Knight curse strikes again. [phpbay keywords="Dark Knight Rises" num="6" siteid="1" sortorder="EndTimeSoonest" freeshipping="true" templatename="columns" columns="3"]