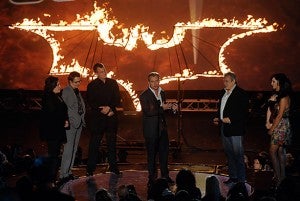 "3-D is a misnomer," The Dark Knight Rises director Christopher Nolan told the Director's Guild of America in a wide-ranging interview that was just released for their in-house magazine. "Films are 3-D. The whole point of photography is that it's three-dimensional." That's why he refused to shoot the third installment of his Batman franchise in the increasingly-popular stereoscopic 3-D format--he told the DGA that he finds the results to be "too small-scale and intimate in their effect"--in spite of the fact that, by his own admission, Warner Brothers would have preferred 3-D and the higher ticket prices that come with it. One of the most widely respected directors of the last twenty years, Nolan discussed a number of issues in the new interview, including his feeling that IMAX is "the best film format that was ever invented." He told the Guild that he doesn't believe any subsequent format has yet lived up to what IMAX can do and that while he prefers to be politely quiet most of the time, he does sometimes bring pressure to bear on his peers to make the switch. He also said that the visual style he crafted during the first two films--shot when 3-D was not as pervasive as it is now--is something he was interested in retaining for the last of his Batman movies.  "I wanted it to be stylistically consistent with the first two films and we were really going to push the IMAX thing to create a very high-quality image," he said in the interview. When he first took on Batman in 2005, Nolan was a rising star with a few critically-acclaimed mid-level hits under his belt but no real experience as a big-budget director. Batman Begins changed all of that, of course, and since its release he's worked almost exclusively with massive budgets; all of his Batman films, as well as the Academy Award-nominated Inception, were made with budgets in excess of $100 million. The only outlier, 2006's The Prestige, was made for $40 million and even that starred actors big enough that they've starred in The Dark Knight and The Avengers. The Dark Knight Rises hits theaters in July, after which Nolan is involved in an advisory capacity not only with next year's Man of Steel but also (according to his IMDb page) with a planned 2015 Batman movie that will start with a clear slate and no connection to Nolan's own franchise, much the way he did after the failure of 1997's Batman & Robin.