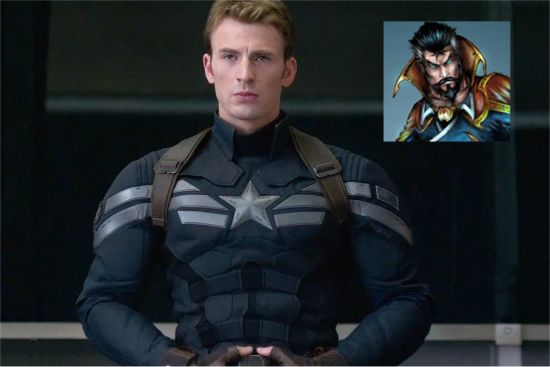 It's long been rumored that Doctor Strange will be part of Marvel Studios Phase Three plans. In Captain America: The Winter Solider, there is a major reference made to Doctor Strange, which is the first definitive proof of his existence in the Marvel Cinematic Universe. Spoiler Warning: If you would rather be surprised as to when and how Doctor Strange is referenced in Captain America: The Winter Soldier, then stop reading now. However, if you want to know so you don't miss the reference, then we've included details below. In revealing the reference, be warned that we also reveal a plot point from the film. In Captain America: The Winter Soldier, Agent Sitwell is revealed as a member of Hydra. Captain America, Falcon, and Black Widow capture Sitwell, and they get him to reveal Hydra's plans. According to Sitwell, Zola created an algorithm that could predict if an individual would be a threat to Hydra's plans. In order to wipe out any potential threats ahead of time, Hyrda planned to utilize S.H.I.E.L.D.'s Project Insight to kill millions of people. Some of the names that Sitwell reveals as potential threats are Tony Stark, Bruce Banner, and Stephen Strange. Of course, Tony Stark is Iron Man, Bruce Banner is the Hulk, and Stephen Strange is Doctor Strange.