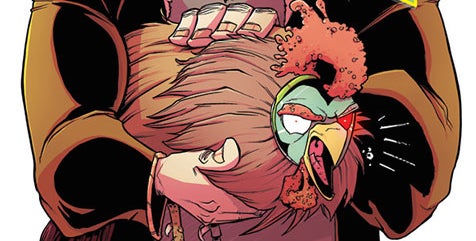 David Tennant, of Doctor Who and Marvel's Daredevil fame, has been cast in the forthcoming animated feature film based on John Layman and Rob Guillory's Chew, says The Hollywood Reporter.

Tennant will star alongside Felicia Day and Steven Yeun, from a script written by Layman. No release date has yet been set for the production.

"I'm really excited about it," Yeun told ComicBook.com last year. "The comic and the character, I've been a fan of for some time now and it's such an interesting way to play the absurd. It'll be very very interesting to see how it gets adapted, if it ever does and I hope it does, into real life."

Tennant's role hasn't yet been identified, but was reportedly meant to be played by Robin Williams before his death last year. The trailer for Boulevard, Williams' final known film appearance, was released this week.

Jeff Krelitz, who directed the animated Torchwood: Web of Lies and Peter Panzerfaust, will helm the film, which is expected to go direct to streaming,Blu-ray and DVD but could have a limited theatrical run.