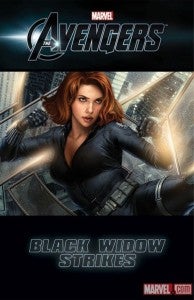 Here's an interesting possible spoiler that was buried in a Marvel Comics promotional piece about a new comic book series tie-in with The Avengers movie. On Friday, Marvel Comics announced a new three-issue comic book limited series called Marvel's The Avengers: Black Widow Strikes. Like Marvel's other comic book tie-ins with The Avengers, the series will be set in the Marvel Cinematic Universe continuity of movies. The series is being written by Fred Van Lente, who is the same writer who wrote Captain America: First Vengeance, which served as the prequel to the Captain America: The First Avenger movie. Marvel's The Avengers: Black Widow Strikes will cover events taking place between Black Widow's appearance in Iron Man 2 and her appearance in The Avengers. The plot will revolve around Black Widow returning to her Russian homeland to stop an international crisis. Here's where it gets really interesting though. In order to accurately write the movie version of Black Widow into the comic book series, Van Lente was allowed to read Joss Whedon's script for The Avengers, which means he's one of the few people outside Marvel Studios cast and crew who knows what is going to happen in the movie. During the Marvel Comics promotional piece, Van Lente gives the usual creator spill of his excitement to be involved in the project. Because Black Widow is one of two members of The Avengers who has not had their on movie, it makes sense that Marvel would want to tell more of her story via comic books. At first, Van Lente suggests that Marvel is welcome to use any of his Black Widow comic book ideas for a movie, but then he adds, "...who knows where she'll be after 'Marvel's The Avengers'; maybe she doesn't even make it out at the end?" While this might sound just like the normal type of tease you might expect from a comic book writer hyping a movie tie-in, there could be more to it than that. Marvel Comics isn't shy about killing off characters in the comic books, so why wouldn't they do it in their movies as well? Wouldn't it be the ultimate shocker if an Avenger died in the movie? And if Marvel Studios were going to kill off an Avenger, then odds are it would be either Black Widow or Hawkeye. Here's another interesting tidbit. When MTV asked Scarlett Johansson if she was going to appear in Iron Man 3 after The Avengers, she seemed to downplay the idea. Johansson joked about putting on weight saying, "I need to like take a little breather from the latex suit for a minute, eat some grilled cheese, you know, then get back into it." Could Van Lente have just let a major Avengers spoiler out of the bag using a clever tease? He has read the script after all. If Johansson wanted to take a break from the character and Marvel wasn't sure on her availability for future movies, then wouldn't having Black Widow die in The Avengers be one way to address the situation? Of course, even if Marvel were to kill off Black Widow in The Avengers movie, we know from the comic books, superheroes can always come back from the dead (which means a Black Widow movie down the road or a surprise return in Iron Man 3 would still be an option).

Does Black Widow Die In The Avengers?