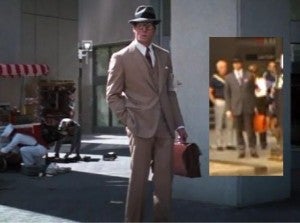 Last week, rumors surfaced online that Man of Steel would have a cameo by a classic Superman movie actor. The rumor first surfaced on a Facebook page for the Caped Wonder website, which is a site that honors the legacy of Christopher Reeve. There was some initial speculation that the cameo could be Christopher Reeve through some type of CGI. Now, a Spanish Superman fan website has uncovered something in some set video which supports that theory. In the Man of Steel set video as seen below, there is someone wearing a grey suit, old-style hat, glasses, and carrying a brown leather briefcase. It's virtually the exact same outfit that Christopher Reeve wore as Clark Kent at the beginning of Superman III. Could Man of Steel have included an actor dressed in the same outfit to pay homage to Christopher Reeve? Or could a CGI of Christopher Reeve be inserted to replace the actor in the scene? Of course, it could all just be coincidence, but the man in the suit really stands out from everyone else in the scene.

Does Christopher Reeve Get A Cameo In Man Of Steel?