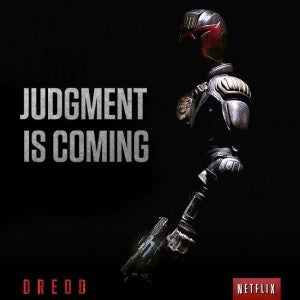 As of yesterday, Dredd became available to stream on Netflix Instant. Fans of the film, or those who haven't yet seen it, can find the page for the movie here if you've got Netflix. Dredd is now on Netflix instant streaming in the U.S.!" Announced the Make a Dredd Sequel Facebook page, which is endorsed by 2000 AD, the publishers of Judge Dredd comics. "Please add it to your instant queues and give it a good rating!" Originally, filmmakers said that the movie, which cost around $50 million to make, would need to generate that much in the U.S. to be considered for a sequel. It did not, garnering only about $13 million in the U.S. and $35 million worldwide. What it has done, though, is go on to sell huge numbers of Blu-rays and DVDs, and become a bit of a social media phenomenon. A fan-started petition for a sequel, which has since been officially adopted by 2000 AD, passed 75,000 signatures two days ago (take that, Batfleck haters and your 25,000!). Karl Urban, who played Judge Dredd in the film, has been lobbying for the sequel as well. The film received mostly positive reviews and, like Pacific Rim this year, got such ecstatic reviews from its supporters that it's easy to mistake the "mostly" to be universal if you're not paying close attention. Here at ComicBook.com, we named it the best R-rated comic book movie ever made.